Last month I finally managed to take a trip that had been in my plans for quite some time. I am talking about the boat trip that goes up the river Mira, between Milfontes and Odemira. The river Mira, one of the least polluted in Europe, springs in the serra do Caldeirão in Algarve, and runs its course for about 130 km until it reaches the Atlantic in Milfontes. It is one of the few Portuguese rivers that flows from south to north. Along its course, the waters are captured by the Santa Clara a Velha dam, as I have written in a previous post.

This part of the river between Milfontes and Odemira is around 30 km long, can be navigated by boat, and is part of the Parque Natural do Sudoeste Alentejano e Costa Vicentina. During the summer months, two boat tour companies organize such trips, going both ways, up the river, and down the river. I opted to take the option of going up the river, starting in Milfontes. The trip takes about 2,5 hours in total, in a small boat that can carry 6 people.

We met André (from Bture), the skipper, a young and pro-active fellow, a bit before departing time, at 10.30 am. The schedules are dependent on the tides, so going upriver means profiting from the rising tide. After everybody settled, we started our trip with a short detour to see the magnificent view of Milfontes from the river – the highlights are the beaches (the morning was cloudy and somewhat cool, so not many people were around), and the 16th century fort of São Clemente, with its ramparts rising almost from the sand.

We were soon passing below the bridge, that was built in the mid-1970’s, thus facilitating the communication by road between the two margins; at its time, the bridge was a key element of fostering the development of the entire coast. Before that, the closest crossing point was in Odemira proper, 20 km away. Not to mention the locals of Milfontes themselves, that had to cross by boat. Today, crossing by boat is still a fun experience, and Dona Maria has a small boat just to do that. After the bridge, the river keeps winding in quiet and smooth sections, and we cross several fishermen in their boats. It seems a busy morning, but then, this river has abundant fish, like sea bass and corvina. There are also many species of aquatic birds, that André is happy to identify.

The sky is still covered in clouds, but this is not bad, as it makes the trip a bit cooler during this late July morning. The river continues to meander between gentle hills covered with cork oak trees, pine trees, and eucalyptus. Here and there, a few isolated houses can be spotted amongst the greenery, normally associated with small wooden piers. We pass a few abandoned salinas, old tracts of trapped water that in the past would produce salt by evaporation.

The silence and quietness are impressive, and we seem to simply float above the water. The boat’s engine is the only sound we hear, but even then, it is not that loud, because we go at low speed. About halfway along the trip, André suggests opening a bottle of wine, accompanied by some typical cheese from Alentejo: what an excellent idea! As if agreeing with us, the sun finally breaks the cloud cover, and we now seem to glide surrounded by the green and yellow hills, plus the sky reflected in the water. The margins are abundant with reeds, that hide the odd small bird. After another gentle curve, we spot a present-day oyster farm, it was reactivated in the 1980’s and it is still lucrative.

The morning rolls along at a slow rhythm, and the river gets narrower as we approach Odemira. After a final curve, we finally see the village in the distance, with its houses climbing up the hills, painted in the typical white facades with blue and yellow stripes. We dock in the small pier, and it is time to say goodbye to André and our trip companions. There is now some free time to have lunch, and after a couple of hours, a taxi transportation is arranged to carry the participants back to Milfontes. André will wait for the tide to reverse, and will make the trip downriver now, with a new set of passengers. It was a great experience for me, being able to know and see the region from a different perspective.

I took a lot of photos with my small and trusty companion for such occasions, the Fujifilm X100F. I can see a lot of potential to make this trip again, perhaps more dedicated to bird watching, which requires a different photographic kit.

As a final note, I leave you with a few links for your reference. 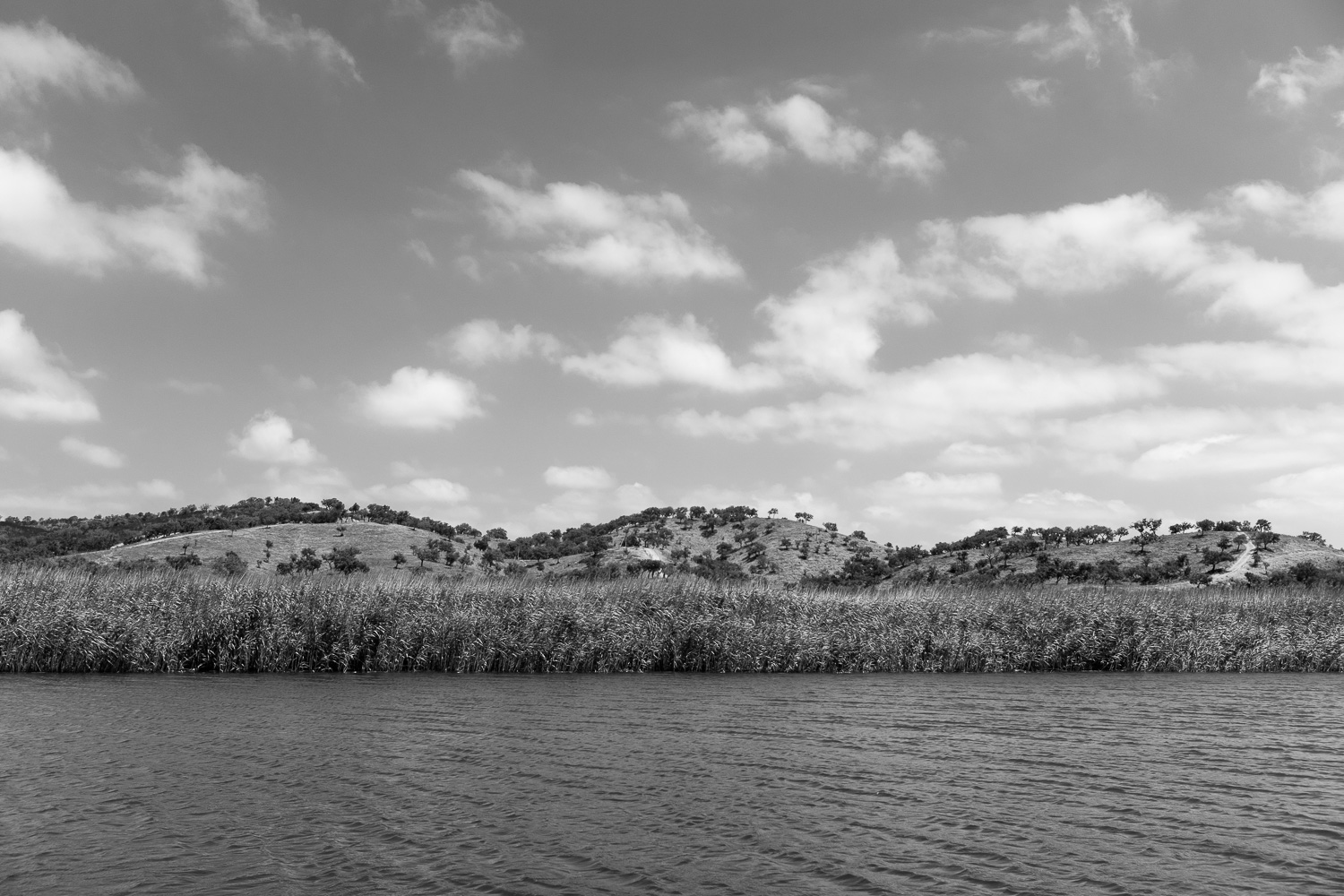 During the summer months in Portugal, a good alternative to avoid the crowded beaches on the coast is to head out to the interior. In recent years, the popularity of fluvial beaches in the interior of the country has increased, as they offer a nice experience to those that look for the quietness of a rural setting. Far from the busy coastal beaches, it is possible to combine a visit to a historical village with a cool swim to mitigate against the summer heat.

One of such places is the village of Constância, that I have visited recently with my family, simply to spend a nice and quiet day surrounded by nature. This village is in the Central area of Portugal, and sits atop a small peninsula, nested between the rivers Zêzere and Tejo. Constância is rich in historical and cultural heritage – the first Iberian inhabitants have settled here, followed by Romans, Visigoths and Arabs. One of the greatest Portuguese poets, Luís de Camões, author of the Lusiadas, has lived here between 1547 and 1550. In more recent times, the metal bridge over the Zêzere was designed by Gustav Eiffel, of Parisian fame.

The fluvial beach is a nice spot to spend the day, swimming in the clear and fresh waters of the river or resting in its forested green margins. Before leaving, we decided to stroll around the village in the late afternoon. The village has many points of interest, from its pelourinho to several medieval churches and chapels. Consequently, there are many interesting details to notice and photograph, wandering around the narrow streets. It is well worth it to walk up the village until the top of the hill, from where a broad view of the Tejo river opens to the east.

For this day trip I only carried the small Fujifilm X100F camera, the perfect tool for such occasions. It was entirely suitable to take a few obligatory family snaps, plus the required documentary shots. I also quite like the Acros B&W film simulation, which I have applied during RAW conversion. I think it suited the historical feel of the place nicely.